Vanuatu is located at the south-west of Pacific Ocean, one of the island countries in Melanesia. It consists of around 80 islands of which 68 islands with habitants spreading.

It has rich natural resources, such as fertile land and abundant sea products, as well as tourism attractions. Almost all 80 islands have their own characters. For example, Mount Yasur on Tanna Island is honoured as the “World’s Most Accessible Active Volcano”. Adventurers can stand near the crater edge to look at smoke and ashes emitting from the bottom. People exclaimed over the beauty of what they call “God’s Firework”. It is also a place where you can put aside your worries and enjoy the quietness. Silky white sand and a deep wide ocean in the South Pacific offers an ideal place for leisure activities such as diving, golf, yacht sailing, windsurfing and all kinds of beach sports. Tropical delicacies, seafood, French cuisine, Chinese dishes, particularly coconut crabs, are all worth having a try. Surely they will bring you a fabulous taste experience.

35 metres away from Port Vila beach and 3 metres below the sea level, there sits the Vanuatu’s official Underwater Post Office inside a natural ocean park. It looks like a giant soda can on the seabed. Over 50,000 visitors come here for diving every year and mail their postcards. Instead of traditional ink stamping, the post office staff embosses the date on postcards. What a wonderful experience mailing your postcard in this astonishing underwater world!

Vanuatu was ranked as “The Happiest Country in the World” by New Economic Foundation in 2006 and 2010. So where does its happiness come from? 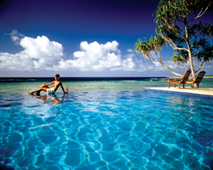 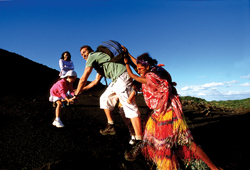 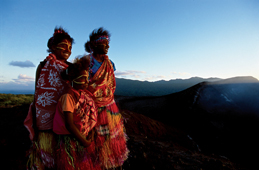 1. Abundant resources and a simple live. Located between the latitude of 15° 0’ S and 20° 0’ S, Vanuatu luxuriates in a tropical maritime climate with stable temperature across all seasons. Its abundant rainfall nourish trees and marine lives. Each family inherit a land from its ancestor or is assigned one by the tribal chief as a provision for basic living. They pick fruit such as banana, avocado, mango, papaya, pineapple, passionfruit or breadfruit whenever they feel hungry. They also wrap natural food such as taros, Chinese yam, sweet potato or banana into tree leaves and roast it on stone to make their national dish Lap Lap. Spring water and coconut water are always available when they feel thirsty.

2. Beautiful scene. The world’s largest coral sea is the neigbourhood of Vanuatu. This stainless lively blue sea dwells over 300 coral species and 450 kinds of fishes. Thriving forests, Champagne Beach – the “Most Beautiful Beach” in South Pacific, and Mount Yasur – the “World’s Most Accessible Volcano” together build a splendid natural scene right under your nose. This is exactly the utopia where people long for. 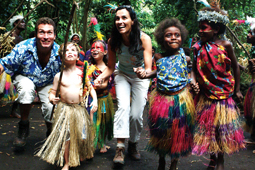 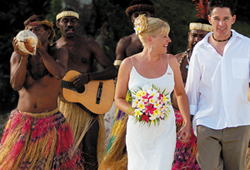 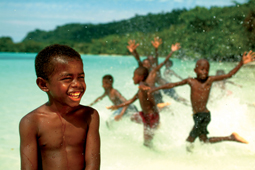 3. Value family relationship and sharing. Close tie and peace can be found among families in Vanuatu. All people share resources and asset, help each other and participate in making decision. In important festivals, particularly Christmas, they spend all they have to buy home-rare items and share with their tribespeople. Exchanging and sharing in this “big family” time become a way to recharge themselves so that they can continue their daily journey.

4. Tribal chief led society. The chiefdom is part of the traditional Melanesian culture and still impactful nowadays. It has a clear structure and succession path. Each tribe or island has its own tribal chief. They are responsible for assigning work, allocating assets, hosting wedding ceremonies, funerals and other ceremonies. Representing chiefs of different islands and tribes sit in the National Council of Chiefs and participate into the final decision making and management of the country. Tribal chiefs are particularly important for those remote islands without government and police. 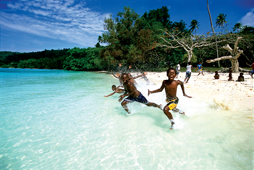 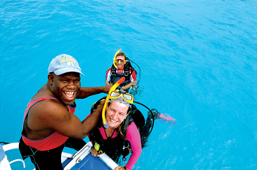 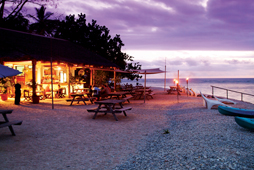 5. Being content and peaceful. Vanuatu people live according to the nature, work during daytime and rest after sunset. The typical houses are made by wood and they sleep on straw mat.

6. Depend on traditional industries and is less concerned of money. Most of the people participate in natural economy. The pillar industries include tourism, agriculture and fishery. 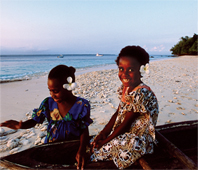 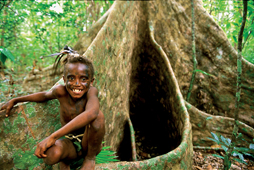 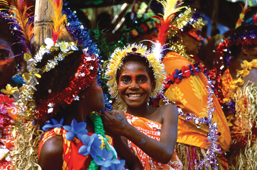 7. Diversified culture yet live harmoniously. Vanuatu has a population of about 240,000 people with various tribes and languages. It is one of the most diversified countries in the world. Each island or area has its own tradition in music, dance, tribal face pattern, style of arts, celebration ceremonies, tribal chief succession and power structure. Vanuatu organises traditional art festival regularly to promote its traditional arts such as sand drawings, carvings, knitting, so that the culture, tradition and the custom can be passed down to next generations. Vanuatu people in rural or in urban area are all immersed in this intense artistic environment. Let’s salute to their simple material world yet rich in spirit.

8. Diversified society yet compatible. Vanuatu has developed through the Stone Age to the Information Age. It departed from the joint sovereignty of British and France in 1980 and became independent tribal country. It is a member of Commonwealth of Nations and International Organisation of La Francophonie. English, French, and Bislama are all official languages. With majority in Christianity, different religion came to this land and took root through various channels. People with different religion background live in harmony. The above has developed a unique social ideology – Melanesian value + Christianity doctrine + democratic socialism. It also formed people characteristics which are honesty, simplicity, generosity and tolerance.